Revival of a Nation’s Lost Darling 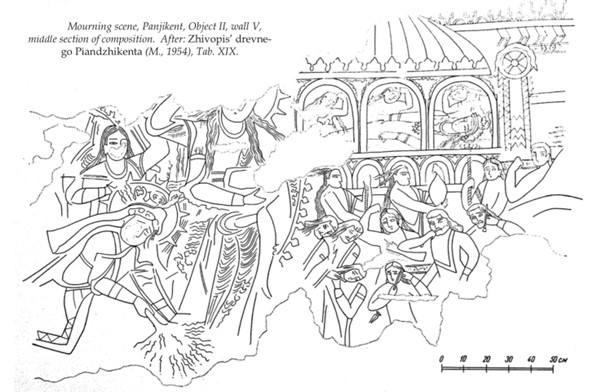 For a few weeks, the media have been broadcasting news about women cutting their hair in solidarity with the Iranian people. It all started when a young Iranian-Kurdish girl Mahsa (Zhina) Amini, was killed by the Morality Police for the “inappropriate” way of wearing her Hijab. The blog’s introduction may sound political, but my goal here is to discuss a tradition that has been illustrated, performed and repeated in support of Iranian women. It is called Gisoo-Boran in Persian and has deep roots in Perian/Iranian Culture. You have probably guessed right. It is the tradition of women cutting hair or shaving their heads.

Hair is a precious commodity for many worldwide, so it is for Iranian women. The only time an Iranian woman voluntarily would give up her hair was when she grieved the loss of her loved one. Although this practice of mourning for death has been forgotten for centuries among the broader population of Iran, some ethical societies, such as Kurds, Lors, and Bakhtiraries[i] in Iran, have used this expressionist act to express their sorrow. The origins of this practice date back to ancient Iranian and Mesopotamian myths and Persian literature. The most famous Persian literary masterpieces, such as Shahnameh, which is also the oral history of ancient Iran, narrate stories in which women cut their hair to mourn the loss of their beloved. Also, famous Iranian poets such as Hafez, Saadi, and a contemporary writer of Iran’s literature, Simin Daneshvar refers to this tradition in their writings[ii]. 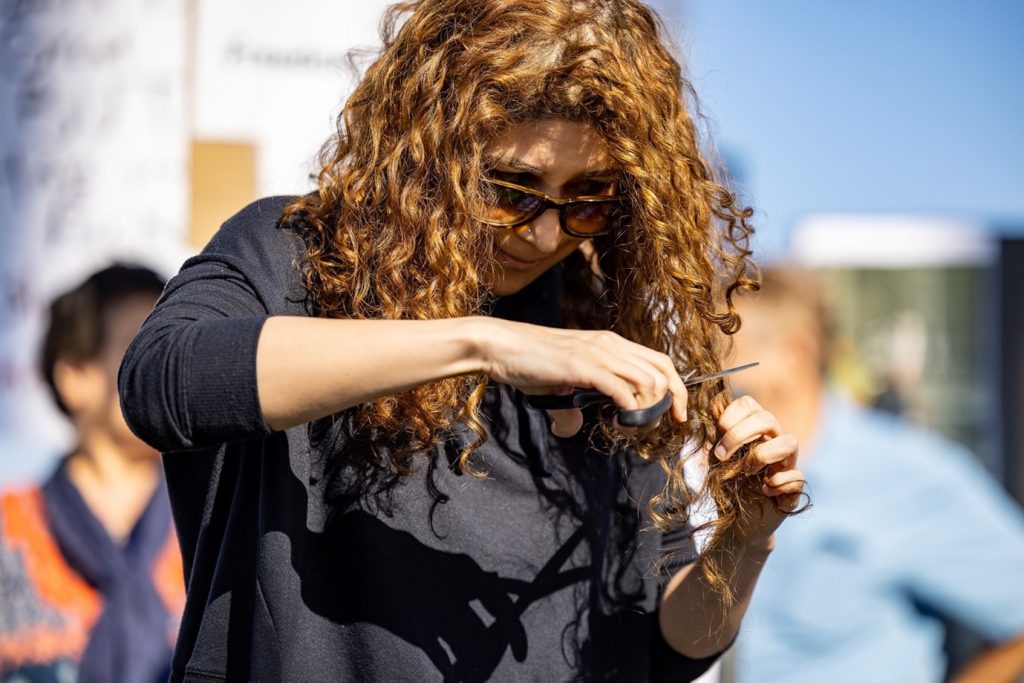 For the last 49 days since the death of Mahsa Amini, this practice has become widespread. Shaving hair as a mourning tradition has now become a socio-political act. People worldwide demonstrate solidarity with the Iranians fighting against injustice and violence for women’s right to choose. They cut their hair in public or on TV to make a statement.

Further in this blog, I will attempt to look at how the discussion of the significance of intangible heritage protection has evolved during the last century through the perspective of international institutions and look at the current case of the Iranian people as an example of the safeguarding and revival of a nation’s lost darling. 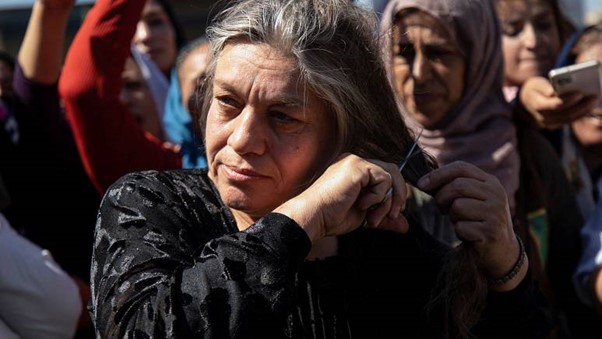 Source: Euronews.com: A Syrian woman cutting a part of her hair to mourn the loss of Mahsa Amini, a traditional expression from Iranian Culture.

Since the beginning of the 21st century, the scope of the definition of the heritage concept in practice, theory, and policy has triggered attention from the necessity of the conservation of tangible aspects of heritage to more holistic aspects of it. Discussions on the importance of safeguarding and protecting intangible heritage constituted a significant and influential part of the shifts in the heritage paradigm. The “Intergovernmental Conference on Cultural Policies for Development” in 1998 brought to the table the necessity of protecting and conserving the multiple attitudes of human activities, all related to the last definition of intangible heritage. From then until 2003, other international documents such as San Antonio Declaration (1996) and the UNESCO Charter on the Vernacular Architecture and Its Conservation (1999) referred to the importance of the intangible heritage and tangible aspects.

However, on the 17th of October 2003, UNESCO introduced the “Convention for the Safeguarding of the Intangible Heritage” along with the “Declaration of the Kimberley Workshop on the Intangible Heritage of Monuments and Sites” to underline the significance of the protection and safeguarding of intangible heritage, with an official publication and within the 14th General Assembly of ICOMOS.

According to this convention, the “Intangible Heritage” is:

“The practices, representations, expressions, knowledge, skills – as well as the instruments, objects, artefacts and cultural spaces associated therewith – that communities, groups and, in some cases, individuals recognize as part of their cultural heritage. This intangible cultural heritage, transmitted from generation to generation, is constantly recreated by communities and groups in response to their environment, their interaction with nature, and their history, and provides them with a sense of identity and continuity, thus promoting respect for cultural diversity and human creativity.”  (UNESCO, 2003, art 2)

This document emphasizes the importance of the protection of intangible heritage not only as a valuable practice from past generations to the present but also as an expression of human rights. Furthermore, this convention recognizes the intangible heritage as a medium that creates an environment for a (re)new(ed) dialogue among communities against globalization and social transformation (ibid, introduction).

Thereafter, direct attention to the conservation of the heritage’s intangible attributes and the tangible aspect of it emerges. Following this movement, other international documents were published by UNESCO and ICOMOS. The intention of these documents in the new era was to underline the importance of intangible heritage in the sustainable development and conservation of urban heritage as a part of their holistic perspective. Documents such as the Xian Declaration of ICOMOS (2005) and the Quebec Declaration of ICOMOS (2008) referred to the intangible heritage as a crucial component of the setting of heritage (ICOMOS, 2005, 1), and as an essential part of the identity of communities that have created and transmitted spaces of cultural and historical significance (ICOMOS, 2008).

Last but not least is the “Recommendation on the Historic Urban Landscape” (2011), in which the intangible components of the urban heritage are introduced as a “key resource in enhancing the liveability of urban areas, fostering for social inclusion and economic development in a changing global environment” (UNESCO, 2011, Intro, 3).

Considering all this background of the discussion of the importance of intangible heritage within the international discourse, in real-life experience, we can witness that with the massive flow of globalization and capitalism in the world; despite the heritage institutions’ endeavour to protect, raise awareness, and safeguard the intangible heritage of communities, these practices are disappearing quickly. The question is, how can people protect and save their intangible practices from vanishing?.

Referring to the recent events in Iran, it is evident that intangible cultural heritage can reform and revive with different intentions and meanings. In the case of Mahsa Amini’s death (although the action of the practice, its depiction, and body language have maintained the same), the meaning of this practice has broadened. The tradition of Gisoo-Boran represents the power of intangible heritage and its capacity. If tangible heritage has its physical boundaries limited radius, the intangible heritage and its spread geographically and cognitively are unlimited. Now we can track on the news that Italian, Swedish, Dutch, British, and many more women worldwide are practising the same tradition to show empathy. 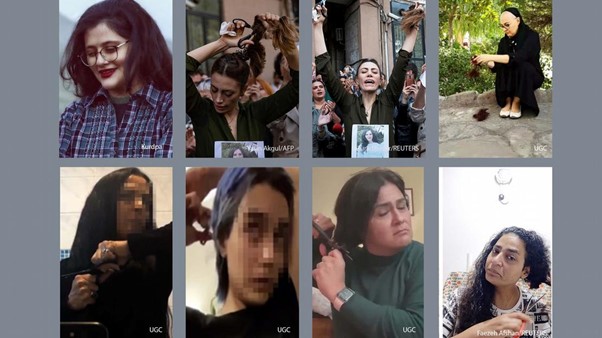 Therefore, it can be stated that intangible aspects of heritage can be more inclusive than others. Acknowledging this fact about the intangible properties of heritage, communities not only pass the practices on unchanged but adapt and enrich them to fully express themselves.

The Iranian Gisoo-Boran tradition has crossed overseas and embraced multiple meanings: from mothers, sisters and wives who mourned the death of their young children to Iranians in and outside of Iran expressing their sorrow for the loss of their sister and protesting against long-time cruelty. Now non-Iranian sisters and brothers are broadcasting their empathy with their Iranian fellows. This multi-layered meaning is a supportive cornerstone for the HUL paradigm (2011) that encourages communities to conserve their pasts, build their present and support their future by protecting different layers of meanings through time.

[i] The socio-geography of Iran has a broad diversity in races, ethics, religions, and languages. Iran is constituted of spatial-geographical sections called provinces. Almost each of these provinces belongs to one of the ethical groups, such as Azaries, Balouchs, Kurds, Turkmens, Fars, Gilaki, Lors, Kermani, Bakhtiari, etc. Although each tribe used to have specific cultural traditions, the roots of the cultural traditions’ demonstrations were all the same rooting in Ancient Persia.

ICOMOS. (2008). The Quebec Declaration on the Preservation of the Spirit of The Place. http://www.icomos.org/quebec2008/quebec_declaration.

ICOMOS. (2005). Xi’an Declaration on the Conservation of the Setting of Heritage Structures, Sites and Areas. https://www.icomos.org/images/DOCUMENTS/Charters/xian-declaration.pdf

ICOMOS. (2003). Towards a declaration on intangible heritage and monuments and sites http://www.icomos.org/victoriafalls2003/kimberley.pdf

UNESC. (2003). Convention for the Safeguarding of Intangible Cultural Heritage, www.portal.unesco.org/culture