Objects, values, and heritage in the Gyanvapi mosque case 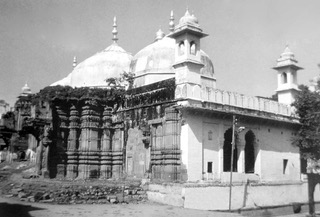 In Varanasi, in the northern Indian state of Uttar Pradesh, the Gyanvapi mosque is under the scanner. A group of Hindu petitioners is trying to gain legal access into the mosque to offer prayers, on the grounds that the mosque was built on temple remains. While the mosque authority filed a counter petition to stall this event, the Varanasi district court last week dismissed it. This means that the case can proceed to a further hearing, a cause for interim jubilation for the Hindu side.

The Gyanvapi case is a legal and political hot potato, and one in a string of cases in recent years representing relentless attempts by the Hindu right (both those in power and rabid mobs) to wipe Islam out of public space and build a Hindu nation. The troubled history of tussle over the mosque complex goes back to the early 1990s. Attempts to prove the Hindu character of the structure stem from claims that Mughul emperor Aurangzeb had demolished the erstwhile temple in 1669. In 1991, petitioners demanded that the mosque be demolished, the structure be declared as part of the temple complex it was abutting, and Muslims be removed from the complex. In 2019, a new case was filed for an archaeological survey of the disputed part. And in the current case, in 2021, a fresh pack of Hindu zealots asked to be allowed to enter into the mosque and offer prayers to the Hindu idols.

In April 2022, following their petition, the Varanasi court ordered a video survey of the interior to be conducted. Based on the leaked tape, the petitioners claimed that several sculptures of Hindu deities were found, including a shivalinga, a representation of the Hindu lord, Shiva. The mosque authorities countered that this was in fact a wazu, an ablution tank for purification before offering namaaz. The findings could become evidence in the case.

The Gyanvapi case is implicated in the interpretation of the Places of Worship Act, 1991. According to this law, the religious character of a place must be frozen to what it was on 15th August 1947, the date of Indian independence. This means religious sites that were mosques on Independence Day remain mosques while the law is in force. While this sounds pretty straightforward – after all, Gyanvapi mosque should be covered by this definition – the law is still open to interpretation based on how the case is argued, and further claims that Hindu prayer was being carried out well after 1947. What is interesting however, is the difference in arguments that drive the two sides.

The arguments put forth by the Hindu side draw on the narrative of the India being a Hindu nation with Hindu origins. Raking up history, till even as far back as 1194 AD – when the temple was supposedly demolished by a Muslim dynasty – is seen to add meat to the case for Hindu claims to the structure. Correspondingly, there is a focus on the supposedly true nature of the building structure, seen to lie in its materiality, and finding ‘Hindu’ objects like a shivalinga fattens this narrative. With their arguments being premised on objects being a reflection of truth, it is no wonder that the petitioners’ lawyer demands, “Wall should be broken, survey should be done. Will ask for carbon dating to be done.” Objects are being used to make a moral case which are then tried to be accommodated within the law of the land.

For those on the other side, the so-called objective truth is not simply material. The mosque authorities do defend the objects found as being related to Muslim worship, but other arguments primarily derive from the values of a secular India. In this line of thinking, the finds are beside the point: the truth is aspirational, not locked in a chunk of supposedly ‘Hindu’ stone. For those batting for a secular India, what needs to be preserved are the secular values that became the country’s building blocks at independence, and as correspondingly intended by the law. This means, communal harmony is paramount, and as a former High Court Chief Justice reminds us in context of the law, “the Parliament has mandated in no uncertain terms that history and its wrongs shall not be used as instrument to oppress the present and the future”. Seen thus, it was unjust of the court to have even granted permission for the disputed area to be surveyed.

There are differing world views on both sides when it comes to considering heritage in the arguments. The arguments on the Hindu side see heritage in the shape of a convenient object that will suit their political agenda. This means digging into the vestiges of the past to pinpoint the wellspring of the nation. These arguments burrow deeper and deeper into the past in attempts to construct the nation as Hindu, both figuratively and literally.

The arguments on the secular side hew to the view that heritage is about values: secularism, justice, harmony. These may not be traceable to a specific object (apart from, perhaps, the constitution) but can be expressed through decision-making with respect to built space, i.e., in the form of protection of the mosque. In this approach, to borrow from Harrison (2013: 228-29), heritage is what “we choose to hold up as a mirror to the present, associated with a particular set of values that we wish to take with us into the future”. These values are as relevant in 2022, as at the dawn on independence in 1947, and heritage is seen as not of the past, but of the present and the future. Here, nation-building is premised on a world view that cares to engender an ideal Indian society, i.e., one where minorities can live without fear of erasure.

The legal case of the Gyanvapi mosque and claims to it are as yet ongoing. Currently the Places of Worship Act, 1991, that debars conversion of religious sites, is invoked in support of the mosque’s protection. This makes the law highly unpalatable to the Hindu right as it stands in the way of their plans for en masse cultural heritage takeover. The ruling party too is calling for the law to be scrapped. If that comes to pass, the moral case of the Hindu right will no longer need legal backing. And archaeologists in India will, quite literally, have a field day.

Image 1: Gyanvapi mosque, with the remains of the former temple, 2018

Image 3: Today the Kashi Vishwanath temple (in the foreground) and Gyanvapi mosque (in the background) lie cheek by jowl with each other. Image from 1905.