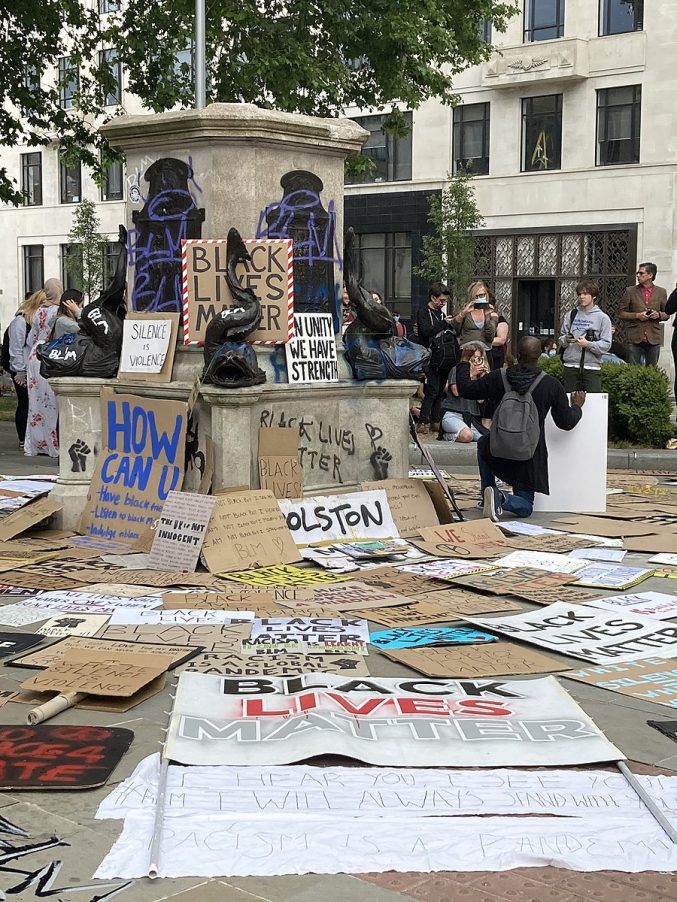 Since the statue of 17th-century slave trader Edward Colston was toppled in Bristol, England, during a ‘Black Lives Matter’ protest, there has been a vibrant debate about how to deal with monuments dedicated to controversial individuals and historic events. In the subsequent months, many commemorative monuments have come under greater scrutiny throughout the world, and people have been asking: Do these monuments still have a place in our societies?

At Oxford University, there were calls to remove a statue of Cecil Rhodes, a British imperialist whose policies historians say set the stage for apartheid in South Africa[1]. In Belgium, protesters daubed with paint a statue of 19th-century Belgian colonizer king Leopold II, as well as a number of street signs bearing the names of colonial figures[2]. In the United States, more than a hundred Confederate statues were removed from public spaces[3]. And in Portugal, plans to commemorate the fallen soldiers of Portugal’s Colonial War (also known as the Overseas War) which included erecting a new monument in Porto, were met with immediate opposition from anti-racism activists[4]. Memory activism is not confined to Europe. In Brazil activists have suggested pulling down a statue of Manuel de Borba Gato, a Brazilian bandeirante (colonial explorer) and outlaw who roamed the country’s interior in the late 17th century, capturing indigenous inhabitants who were forced to work as slaves.[5]

Some of these monuments have stood in public squares for more than a century. Until very recently, they have gone unnoticed and unquestioned by many people. In an essay, Austrian writer Robert Musil even declared, “The remarkable thing about monuments is that one does not notice them. There is nothing in this world as invisible as a monument”[6]. Musil suggested that monuments, once they became part of the landscape, no longer attract the passers-by’s  attention. But these recent controversies remind us that these monuments are anything but invisible.

Acts of iconoclasm in different contexts are well documented in the literature. In all societies, major political change or the emergence of new socio-political forces tend to be reflected in transformations of the symbolic landscape[7]. The deliberate destruction of churches, crosses and Catholic relics during the Protestant Reformation, the demolition of the Vendôme Column during the Paris Commune, and the toppling of Communist-era monuments after 1989 are just some of the most staggering examples. But if heritage practices of removal are not unique or unprecedented, what differentiates contemporary calls to remove statues from earlier ones?

Well, there is no easy answer for this question. But what we do know is that modern calls to remove statues all over the world are pushing for a more open debate over the consequences of colonialism, slavery and its abolition. ‘Memory activists’[8] are organizing petitions and demanding a greater recognition for all parts of history[9], even the most shameful ones. Though this is far from the first time they have directed their attention toward controversial monuments[10], the debate has been re-ignited since the killing of George Floyd by a white police officer in the United States.

Indeed, the removal of problematic monuments means different things to historians, politicians, activists and the civil society. Some believe that monuments should remain where they are. They say that removing statues from display in public spaces is akin to erasing or re-writing history. Alternatively, those who advocate for their removal suggest that these monuments represent individuals whose actions and legacies should not be celebrated. They argue that toppling down a statue doesn’t mean erasing history. Rather, it means reconsidering the values that we wish to take with us into the future.

It is not my intention here to judge the merit of any intervention or act of removal. For many of us who actually work in and study processes of heritage and memory-making, this debate does not seem to be either straightforward or obvious. Perhaps, we should take a step back and briefly consider the different perspectives through which heritage is perceived. This can help us to think about why and how a variety of things can became heritage, can be contested, or can cease to be heritage.

Heritage is a dynamic process﻿

The definition of heritage has progressively shifted from a traditional preservationist approach — meaning here the static state conservation of tangible heritage attributes — to a constructivist perspective[11]. In the present context, many scholars emphasize that heritage is constructed rather than passively inherited from previous generations. In her seminal work, Uses of Heritage (2006), Laurajane Smith claimed that heritage is a cultural process or performance of meaning-making. According to her, heritage is not a thing or a place, but ‘an intangible process in which social and cultural values are identified, negotiated, rejected or affirmed’[12].

To complicate matters further, processes of ‘heritagization’ are characterized by inclusions and exclusions. Within a society, some groups have more power than others to legitimize their values, beliefs and interests, in what Smith refers to as the ‘authorized heritage discourse’. This results in a dynamic process which involves competition over whose interpretation of the past will prevail. In 1996, Ashworth and Tunbridge wrote: “All heritage is someone’s heritage and therefore logically not someone else’s”[13].

If we accept that the meanings attached to heritage change over time, it should be little surprise to find that the same applies to monuments. Though they often appear as fixed objects within the landscape, their meanings change in response to political and cultural shifts, as well as the emergence of new information. Most importantly, they can be interpreted differently by different people.

The creation of official monuments has often been driven by political elites, who generally have more power than ordinary people to shape the commemorative landscape. Within this context, it is important to recognize that the monuments created by them represent a very narrow historical narrative. Even in cases where monuments were built at the initiative of the government, that does not mean that they reflect the history and values of an entire society.

Thus, the point I would like to make is that processes of heritagization will, by their very nature, include some people and exclude others. Recognizing these inequal relationships can help us understand why certain groups strive to make their histories visible in the public space. If we look beneath the surface, we can see that these protests around the world are not necessarily directed to the statues themselves, but rather to the meanings associated with them. They aim to raise awareness of past injustices that continue in the present.

It is clear that we need to think carefully about what to do with problematic monuments. Removing those that no longer reflect the values of a society, is just one of the many approaches available to transform landscapes of commemoration. Some could, for example, choose to relocate a monument to a park or a museum. Others could opt to add on-site information or additional plaques to contextualize monuments historically. Some could expand the traditional understanding of what monuments can be. It could also mean erecting new monuments that incorporate ‘other’ histories. There are indeed many different approaches to deal with these issues, the most important question then becomes: How do we go about making such decisions?

In the world of heritage, many efforts have been made in the last decades to make heritage governance more inclusive and democratic. There are calls for democratization, power-sharing, citizen participation and the negotiation of traditional roles of ‘experts’ and ‘stakeholders’ (cf. Council of Europe 2000, 2005). For instance, democratizing the process by which monuments are removed, altered, relocated, and also erected, seems to be a promising approach. Here, the concept of democratization lies on the idea that communities should have a say in decisions that governments and experts make about heritage identification, conservation and management.

These processes of democratization can be supported and facilitated by governments. The Memorial to enslaved people[14] in Lisbon is a meaningful example of how citizens can be engaged in the production of their own heritage. In 2017, on the initiative of the Association of Afro-descendants Djass (an anti-racist organization) and through the city’s participatory budgeting system, Lisbon residents voted for a project to create a memorial to the victims of slavery. The memorial is being constructed at Campo das Cebolas, an area associated with the presence of enslaved Africans in Lisbon[15].

Opening-up the debate is just an initial step, but it does lay the groundwork for sound decisions. It would allow groups long absent or represented in heritage narratives to share their viewpoints and experiences. It would ﻿encourage participants to better recognise different positions and kinds of relationships with the past. It would stimulate a rethinking of specific monuments and the very things they are meant to represent. It would ﻿help participants come to a better understanding of their own role in heritage making processes. It would also provide a space for people to discuss a number of approaches and, ultimately, let them choose to how deal with monuments that are no longer representative of the values they embrace as a society.

[3] A record number of Confederate monuments fell in 2020, but hundreds still stand. Here’s where. The Washington Post 12 March 2021.

[7] Sabine Marshall, ‘The Heritage of Post-Colonial Societies’, in The Ashgate Research Companion to Heritage and Identity, (Ashgate publishing Ltd, 2008), p. 347.

[9] How to deal with controversial statues? Utrecht University 18 June 2020.

[14] For more information about the memorial, see: https://www.memorialescravatura.com