Bottom-up place-making, community involvement & gardeners’ resistance: an antidote for the pressures of the Neoliberal city 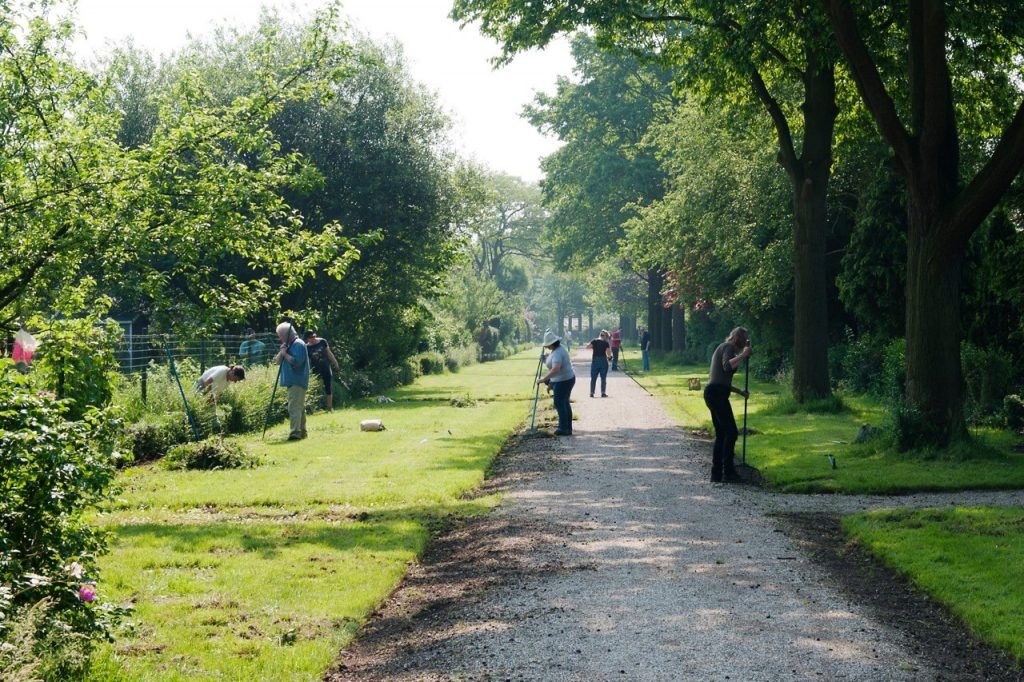 In the sprawling city of Amsterdam, where towering building cranes dominate large areas of the urban landscape, there are still places left where pavement makes way for dirt, flowering abundance, and post-war citizen land tenancy. This Allotment Garden-park ‘Amstelglorie’ is located at an intersection of the Amstel river with the A10 highway ramp, on the outskirts of the Rivierenbuurt neighbourhood. This carefully curated verdant corner is an escape for many Amsterdammers, year in an out tending to their little gardens in a city where having a garden is almost impossible to afford.

It is a place for all walks of life, and costs of renting is deliberately kept low by not allowing land speculation. So low income families can have access as well, if you get to the top of the waitlist that is. Thousands of city-dwellers are awaiting their turn to toil the earth in the post-war historical garden park, although everyone can enjoy it as it is publicly accessible. Still there is a continuous civic battle being fought over planning strategies to keep the historic garden park for all to enjoy. The reason why a green place enjoyed by so many is constantly threatened by the city council administration begs the familiar question; who does the city belong to, and for whom and what values is there still space left?

Amsterdam city is following their urban planning policy ‘Koers 2025’, aiming to build 50.000 new homes within the city limits, to create ‘high quality urban space’ (Gemeente Amsterdam 2020) and to facilitate the growth of the city. This is part of an umbrella policy called ‘Structuurvisie 2040’ (Structure vision) made in 2011, focusing on the strength of the economy and sustainability (Gemeente Amsterdam 2011). Around 2016 it was announced Amstelglorie was to make way for luxury and middle-income housing.

In Spring 2016 members of the park came together to discuss how they were going to create the best chance of survival for their patch of green. They created a campaign with a petition as a reaction to this policy to save the park from housing development. Their appeal to keep the park addresses themes such as accessibility and class diversity, education, biodiversity, air pollution and flood mitigation, and heritage as a separate argument. The themes are also represented in cards designed by one of the gardeners, making provoking juxtapositions such as “oxygen vs. pollution” to make people think about what values to uphold when thinking about the city (Amstelglorie website 2016).

What became clear in an interview with one of the minds behind the campaign was how much of a power issue urban planning is perceived as and how it is disconnected from the urban social and cultural fabric. In her example the famous ‘Vondelpark’ had been heavily protected “by the upper class and powerful residents looking out over it from their villas”, eventually turning it into important urban heritage. In contrast, the area around Amstelglorie, which was previously a polder landscape, is being turned into “Miami vice” with disregard for the socio-economic and cultural history of this area. She says the city planner has spoken out against such parks as being anachronisms in the urban landscape, and wanting to turn Amsterdam into New York using a rigorous densification plan.

In her battle for Amstelglorie she took on the legacy of a Dutch famous artist, Jan Wolkers, as one of the arguments for conservation and speaks about how it symbolises their resistance:

“We already knew that giving up this place would not lead to any social benefit to the city. It would only serve the rich again, while the city is already becoming more of a “patser-oord” (trans. city for show-offs). And by coincidence Jan Wolkers was a very left-wing and workers’ class kind of person, so his heritage fits in with what Amstelglorie is representing now. So we took this argument of accessibility very serious… It is a last vestige of the post-war social democracy we used to have”.

They started a small organisation taking care of the garden and house of the late writer and painter, effectively turning it into a writer’s retreat surrounded by Wolker’s own curated nature, acting as a repository for knowledge about nature and coinciding values:

“By using the house… We are charging it with values again [that Jan Wolkers stood for], love for nature, love for just people, love for growing your own little carrots, and being able to quietly rummage around in the dirt. Wolkers wrote a lot about that.”

The Jan Wolkers-garden and house is now local heritage and an established cultural phenomenon in the Dutch literary community with many people visiting the park to take a peek into the garden.  She is proud of the results and sees how she helped create a new cultural movement around his legacy. In light of this accomplishment she questioned the vision on heritage of the council’s policies:

“In the 1960’s they wanted to make a highway around the medieval centre of Amsterdam! That is now UNESCO World Heritage! But in the 60’s they thought it were all shacks! And they just wanted to have more space for cars… Now they are making everything in the historic centre car free. So this [saving Amstelglorie] says a lot about the future vision of the little pockets of people like us that somehow manage to preserve something”.

The communities around Amstelglorie are not alone, they are an important part of a whole cultural network of allotment garden organisations (‘volkstuinverenigingen’). Such parks came into being during post-war efforts to alleviate food rationing measures. Therefore these garden parks from the 40’s and 50’s are remnants of post-war nation-building, and by nature a whole subculture built up around them. Sadly, the top-down planning structure in Amstelglorie’s case showed no awareness of the cultural, social and environmental losses housing development would entail. Luckily these close-knitted communities had their say in the planning process, and some other plans have been averted due to the participation of so many of them. Yet during 2020 there had to be another appeal to the public to save this culture of urban gardening against a land price raise of 400% to 800% effectively pushing many people out of this cultural network[1]. In a city where the words ‘heat-island’, air-pollution and mass tourism are used to describe its issues, it seems strange to not include such a strong communal culture around managing green space in their main planning strategies.
Even as the City of Amsterdam has announced its strategy using the circular donut economy model (Raworth: 2015, Gemeente Amsterdam 2020), it is still the economic growth agenda of the building sector that is paving the way for ultimately the upper class and cosmopolitan citizenry and city planner to first specify the plans for the urban space. The circular strategy describes having the social wellbeing of the citizens as their foundation (Gemeente Amsterdam 2020: 85), but the case above shows the disconnectedness of such sustainability strategies from the other growth strategies.

It is possible the case with Amstelgorie is just a symptom of a larger issue. The story of the interviewee is that she cannot stay in Amsterdam, the city is too expensive to live a comfortable life for her and her family. Amsterdam is now found in the top 40 most expensive cities in the world (NUMBEO 2021). Lower- and middle-class incomes are being pushed out of the city, overflowing into the surrounding urban conglomeration, or in her case, incentivised to move back to their hometown.

The coming decades will be a strange time of change for The Netherlands, for the first time in history people are buying air conditioning units to combat the simmering summer heat due to more and longer heatwaves, more people are leaving the cities in a reverse migration to the countryside, therefore it is not long before the battle for quality of living space in the urban area of the Randstad will not only be dictated by human intervention. Will this powerplay continue only until the worst happens? Will the citizens of Amsterdam keep fighting for their places?

From: Florence Tonk, Half Heel, Uitgeverij Nieuw Amsterdam, to be published spring/summer 2021

The author has permission from the owners to publish the poem and graphic design.

[1] The petition gathered over 29.000 signatures and forced the local councillor to postpone decisions on the matter of raising land prices for folk gardening organisations and communities. See https://petities.nl/petitions/behoud-de-amsterdamse-volkstuinen?locale=en&fbclid=IwAR1NwA9d_tDFJM9jjyVJxPU5V8DCQzhXPi-iQUGHV2qDX3ho7BGL8bWabfg (last accessed 26 January 2021).