“What is OUV” Revisited 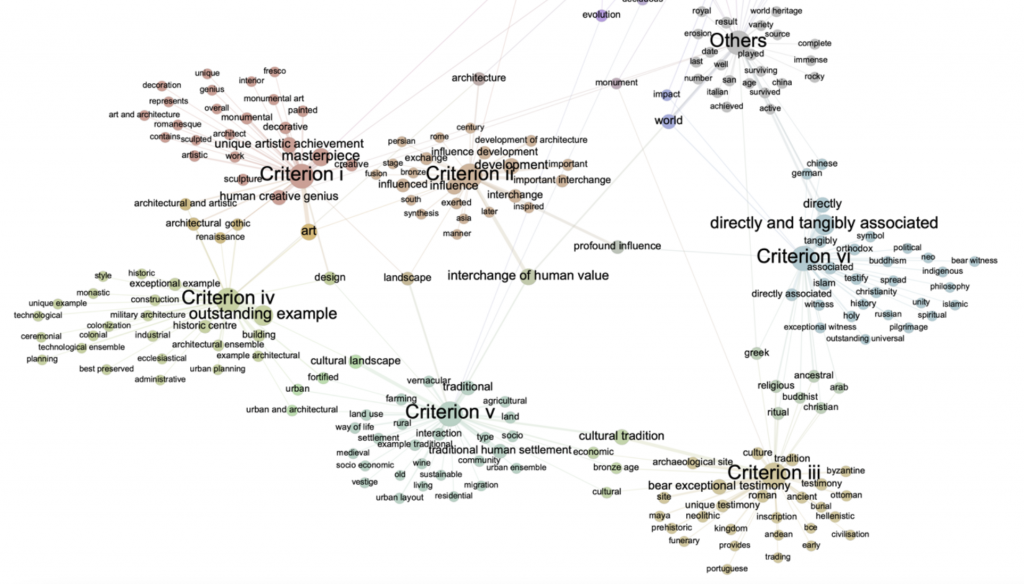 Outstanding Universal Value (OUV) is the core concept of the UNESCO World Heritage List. The concept was defined as the “cultural and/or natural significance which is so exceptional as to transcend national boundaries and to be of common importance for present and future generations of all humanity”[ii].

For any new property to be inscribed onto the World Heritage List, it has to meet at least one of the ten selection criteria, demonstrating its OUV[iii]. The ten criteria reflect the diversity of what can be understood as conveying outstanding universal value, among which the first six were defined for cultural heritage, and the last four were defined for natural heritage. The detailed definitions of those ten selection criteria given by the World Heritage Centre are as follows:

to represent a masterpiece of human creative genius;

to exhibit an important interchange of human values, over a span of time or within a cultural area of the world, on developments in architecture or technology, monumental arts, town-planning or landscape design;

to bear a unique or at least exceptional testimony to a cultural tradition or to a civilization which is living or which has disappeared;

to be an outstanding example of a type of building, architectural or technological ensemble or landscape which illustrates (a) significant stage(s) in human history;

to be an outstanding example of a traditional human settlement, land-use, or sea-use which is representative of a culture (or cultures), or human interaction with the environment especially when it has become vulnerable under the impact of irreversible change;

to be directly or tangibly associated with events or living traditions, with ideas, or with beliefs, with artistic and literary works of outstanding universal significance. (The Committee considers that this criterion should preferably be used in conjunction with other criteria);

to be outstanding examples representing major stages of earth’s history, including the record of life, significant on-going geological processes in the development of landforms, or significant geomorphic or physiographic features;

to be outstanding examples representing significant on-going ecological and biological processes in the evolution and development of terrestrial, fresh water, coastal and marine ecosystems and communities of plants and animals;

to contain the most important and significant natural habitats for in-situ conservation of biological diversity, including those containing threatened species of outstanding universal value from the point of view of science or conservation.

In the year 2007, the International Conference on Values and Criteria in Heritage Conservation organized sessions to discuss the definition and evolution of OUV as an integral concept, discussing the terms used in the current (by then) World Heritage justifications and proposing possible enhancements to clarify the concepts. These discussions resulted in the well-known ICOMOS Report compiled by Jukka Jokilehto – “What is OUV, Defining the Outstanding Universal Value of Cultural World Heritage Properties” – published in 2008[iv]. The report described the evolution of OUV since it was first proposed, summarized the essential focuses of each cultural selection criterion, and matched the criteria to the main themes in existing WH properties. In the report, Criteria (i) to (vii) are respectively summarized as Masterpiece for criterion (i), Values/Influence for criterion (ii), Testimony for criterion (iii), Typology for criterion (iv), Land-Use for criterion (v), Associations for criterion (vi), and Natural Beauty for criterion (vii). Abundant examples are given in the report to indicate the themes referred to each criterion with highlighted keywords. For example, for Luis Barragán House and Studio (2004) under criterion (i) with the theme of domestic habitat, the sentence was illustrated in the report as:

The House and Studio of Luis Barragán represents a masterpiece of the new developments in the Modern Movement, integrating traditional, philosophical and artistic currents into a new synthesis.

This research takes advantage of the advances of computational techniques and the growing integration of artificial intelligence in the everyday life nowadays, to upgrade and update till today, the analogue approach applied for the 2008 ICOMOS report. In the most recent paper, published in CIPA 2021 Symposium on Heritage Documentation[v], computational methods have been used to decodean illustrated lexicon used to justify the OUV of the properties inscribed on the World Heritage List. It is based on a previous work conducted, where state-of-the-art Natural Language Processing (NLP) models were trained to classify sentences into related OUVselection criteria[vi]. The research repository including its experimental results has been made fully public on GitHub[vii].

Lexicon, literally defined as “all the words and phrases used in a particular language or subject”[viii] was originally a linguistic concept. In modern NLP literature, the term “lexicon” is frequently referred to as a list of words that “carry particularly strong cues” of certain word senses, usually sentiment[ix]. In the case here, this OUV-related lexicon would be a list of words that carry particularly strong cues for certain OUV selection criteria. Initially, a group of keyword lists was obtained from each NLP model that was trained. After aggregating and filtering with a set of rules that were described in the paper, the total words and phrases of the final lexicon were restricted to 354, corresponding to about 60 words per criterion including the terms shared by multiple selection criteria. The lexicon is illustrated in Figure 1. The closer a phrase is positioned near the criterion name, and the larger the term is displayed, the more important keyword it is for this certain criterion.

Generally, the essential topics of the criteria also appear to be the most relevant keywords according to the visualization, consistent with the 2008 report. This is obvious in the cases of criterion (i) with phrase “masterpiece” and “human creative genius”, (ii) with “influence and “development”, (iii) with “bear exceptional testimony”, (iv) with “outstanding example” and “building”, (v) with “traditional human settlement”, (vi) with “directly and tangibly associated”, (vii) with “exceptional natural beauty”, (viii) with “geological process”, (ix) with “ecological”, and (x) with “species”. For each criterion, not only adjectives and verb phrases describing the values were identified, but also nouns and noun phrases revealing the key attributes.

A few more zoomed-in examples from the lexicon illustration can be seen below in Figure 2. In criterion (i), phrases such as “unique artistic achievement, creative, genius, artistic, monumental” highlight the main artistic, aesthetic, and historic values associated with this criterion. Meanwhile key attributes, tangible and intangible, such as “fresco, sculpture, interior, decoration, art and architecture” demonstrate what exactly conveys those values. Furthermore, the shared phrases related to more than one criteria imply the common characteristics and associations of the criteria, such as the group of phrases about architectural art connecting (i) and (iv), about urban form connecting (iv) and (v), and about religions connecting criteria (iii) and (vi), as shown below.

Figure 2 A few zoomed-in examples of the lexicon.

Furthermore, the visualization also suggests that the lexicon could serve as an upgrade of the 2008 ICOMOS report, providing some new evidences. For example, Jokilehto stressed more on the “value/influence” dimension of criterion (ii), while terms related to “development” and “interchange” also seem to have alike importance.

Although the lexicon presented should still be further evaluated and tested in broader real-world contexts, it has the potential to become a tool for researchers and practitioners, to automatically highlight the keywords in the justifications for inscription of World Heritage properties, and to eventually support the nomination process by advising accordingly the best matching selection criteria. It also has the potential to facilitate the drafting and revising of Statements of OUV, useful to support new WH nominations and their evaluation by the Advisory Body Evaluation parties, ICOMOS and IUCN. Moreover, this research may give some new insights to further evolutions of the application of the concepts related to World Heritage and OUV, in support of the World Heritage Committee.

The next step in this research is to apply the lexicon and the trained models in social media analysis, mining the whole corpus in the scale of millions or even larger, and finding out posts relevant to World Heritage and OUV. This approach is to reveal the opinions and perceptions of the general public, and to integrate them into the recognition and mapping of heritage values and attributes[x], towards more socially inclusive heritage planning processes.