Report from the Periphery: anatomy of an urban protest in Georgia 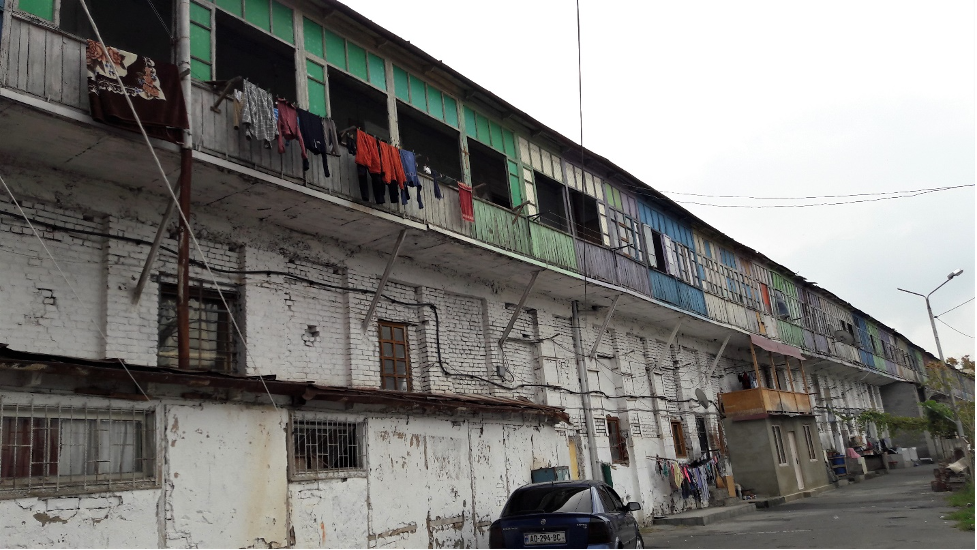 The recent explosion of localized and thematic protests in Georgia, presents valuable information for anyone interested in exploring tensions behind the “oven-ready” recipes for democratic heritage and landscape governance. Repeatedly, various place and professional communities supported by a vanguard of young urban activists and intellectuals raise their voices to oppose top-down development decisions driven by big capital in the name of “development”, surging urban and rural landscapes across the country. Discontent and protest have become a daily routine of reactive struggle, which never reaches the tipping point to transform into proactive forward planning. Many of these civil actions – a “must-have” attribute of liberal democracies – accommodate and systematize turbulent dynamics of the “bottom”, channeling them “up” in a politically acceptable civilized manner.

The recurrent citizen protest against the waves of high-rise hotel development in the seaside port and tourist city of Batumi, which has mutated a once human-scale town into monstrous representation of speculative real-estate market; The local community struggle against a hydropower cascade in Racha, threatening to erase entire landscape ecosystem and its unique biocultural heritage (After few months of sit-in protest, on January 30, the protest camp was forcibly dispersed by the police to clear way for the construction company, the counter-action is ongoing); Protest against eviction and levelling of the make-shift squatter homes in Tbilisi suburban brownfield just before the New Year’s Eve (The symbolic act of charity by the Mayor, handing an apartment to one of the vulnerable families as a personal gift, spilled oil over the fire); The Glovo delivery couriers’ strike, against miserable working conditions and reduced fees in times of pandemic – all these seemingly diverse protests manifest a long-time decease of the state and societal apparatuses of the country, shredded into pieces by Neoliberal policies, fossilized in the momentum of anti-Soviet nationalist turn.

On the backdrop of these events, the collapse of yet another long-crumbling heritage building in the historic district of Tbilisi goes relatively unnoticed – similar to myriad other disastrous events, which fade without street protests, as part of the accepted socio-spatial misery, where fractured and disoriented society fails to resist the process of constant enclosure of the public domain.

All above stories would merit a research on its own, offering vast information for reflection on various social, economic and political problems.  However, here I would like to give a brief account of a less-dramatic story[i], which, nevertheless, presents subtle nuances about a social action against enclosure of public space:

A former public football school, privatized soon after the collapse of the Soviet Union, has fallen victim of real-estate speculations. A developer company, which got hold of this property with the promise of housing construction, went bankrupt, leaving customers, who invested their modest shares in their future homes, empty-handed. For nearly two decades, these people have been seeking justice, while the property, going derelict, got slowly occupied by homeless and refugees and its vast territory used for different formal and informal public functions. In 2018, the local government, in an attempt to resolve the case, allowed a new developer to accommodate the former’s obligations, through possible re-development of the property (more than 5000 m2) into a voluminous residential complex. It was the moment, when an activist group of the local community representatives and professionals launched the protest against the proposed development, demanding the territory to be reserved for a local urban park.  As a result of declared (and undeclared) reasons, the idea of large-scale residential development was abandoned as a new protagonist stepped in – the company, which agreed to settle all disputes and claims related to the property without housing development, in exchange of its acquisition for a symbolic price.  Stemming from its main gambling business, the company leads the high-end market in the hospitality sector, pioneering sensitive re-use of former industrial buildings for cultural and commercial purpose. It is currently upscaling a derelict industrial building – an iconic Constructivist masterpiece next to the disputed site. Declaring its intention to respect the historic character of the area as well as social needs of the local community, the company promises to retain public use of the disputed territory.

The “happy end” of the story barely masques its root causes, which have got entrenched in the social and urban fabric for the last few decades: dismantling of state housing provision, spatial planning and municipal services in the spirit of New Public Management; Handing over the responsibilities to deregulated markets; Dramatic level of housing inequality and homelessness, related to foreclosures, unemployment and job insecurity; Impact of tourism-driven economy and high-end development on crumbling historic districts and its low-income communities, etc. The company, which appeared in the critical moment as a “good Samaritan”, has gained international reputation for trend-setting establishments and lifestyle brands. However, despite the superb quality and creativity of its interventions, they have had significant negative side-effects at the neighborhood level – softly but steadily forging the new “creative”/cultural” image of these areas, leading to increased real-estate prices and gradual “voluntary” relocation of local low-income inhabitants.

In the following years we are yet to see the outcomes of the activists’ protest for an urban park. The process presents quite convincing perspectives for a park to be put in place, thus achieving the goal of the initial protest. However, local as well as international experiences suggest an important question – who will have the key and entry ticket to the “promised land”? – meaning not only physical accessibility, but also social affordability of the new public space.  This issue is now a subject of concern within the activist group, where along with general feeling of accomplishment, many express distrust and doubt on the long-term outcomes of their struggle in view of social transformation of the district, including the eviction and relocation of homeless families occupying the building of the former football school.

The story leads to reflection on structural nuances within bottom-up movements and often contradictory outcomes. Numerous undercurrents make it difficult to achieve transformative change, filtering out some groups from the process, especially when it stretches over a long period of time. The interests of different social classes and status-groups eventually crystalize onto different plains making it difficult to find the line for compromise or consensus in their common cause. It is most vividly demonstrated in heritage/landscape-related campaigns, at least in Georgia, which has seen many “unhappy ends” where these dichotomies are skillfully maneuvered and exploited by dominant powers.

Existing massive academic literature presents more riddles than answers. Amidst the increasingly popular localist, municipalist trends, the commons and, heritage commons, in particular, emerge as an optimistic model for social bonding and just social transformation[ii]. However, there are many ambiguities with regards to those specific conditions, that weld together highly polarized societies of Neoliberal realm into progressively-minded polities. The groundbreaking work on commons by Elinor Ostrom points at boundaries, which allows its members to exclude non-members from using a resource[iii], and which this, it leads us to face challenges of spatial scales as well as social, political and economic hierarchies.

“What do we have in common?” – a pathetic question by the Tbilisi International Architecture Biennial in 2020[iv], echoes a similar theme of the Venice Architectural Biennial[v] and alarms on social strains at different scales[vi]. “Local” is not to be mistaken as inherently more just and the commons as well, could emerge as yet another enclosure, whether elite or community, if there is no recognition of these problems and traps.

DeAngelis, M. 2017. Omnia Sunt Communia: On the Commons and the Transformation to Postcapitalism. Zed Books. London

Lekakis, S. 2020. Cultural Heritage in the Realms of the Commons: Conversations on the Case of Greece. Uniquity Press.London

[v] Harrouk, Ch. 2020. October 7. Hashim Sarkis on “How will we live together?”: Exploring the Question of the 2021 Venice Architecture Biennale, Archdaily. Retrieved from:https://www.archdaily.com/949137/hashim-sarkis-on-how-will-we-live-together-exploring-the-question-of-the-2021-venice-architecture-biennale (February 4, 2021)